Tata Tiago BS6, What has changed?

Since the launch of Tiago back in 2016 it has been one of the top sellers from the company. Well, it has been the most crucial product for Tata Motors. This is the product that changed the fate of the Indian Automobile company.

You ask why? With the Tiago, Tata has finally moved away after 18 years from the ‘Indica’ design theme. It may seem to have some design elements influenced by existing products in the market, but it’s a big departure in the mini hatchback space for Tata which has been mostly about the evolution of Indica in terms of design and styling.

On the outside, the Tata Tiago really does look a lot like a mini Altroz well, many will actually confuse it for the Altroz. The strong character lines running all around the car. Right from the tri-arrow piano black front grille to the trendy boomerang-shaped tail lamps, Tata Tiago is designed to ooze out sportiness. The hood of the Tiago has been designed keeping in mind the safety of pedestrians as well ensuring that Tiago stands apart in the crowd. Sporty angular headlamps, stylish dual-tone bumper, chrome garnished front fog lamps, sporty rear spoiler and the piano black ORVMs, all add to the style quotient of this entry-level hatch.

Step in the car and immediately you will realize that Tata has changed really. The interior feels plusher than the TATA cars we knew. The materials used are of appreciable quality (for the segment the car is intended to be positioned in) the first thing you'll notice is this top half of the dashboard which looks quite premium with the black dashboard, good plastics and a nice Harman infotainment system. Then your eyes will move to the lower half of the dash, and that's when you'll notice the very obvious cost-cutting measures. The plastics and finish of the bottom half are so different from the top half that, it almost seems like two different cars. Well, one can forgive it considering that it is an entry-level hatchback.

Coming to the ergonomics of the vehicle you will find every control near your hand. Every button placement perfect in its place. The touch screen provided is legible. Would have appreciated a physical volume knob. What may make some people feel weird is the calculator font used for the all-digital instrument display. Another element, which may be not welcomed by some are the body-colored accents around the AC vents as they are a little too bright to fit into the sober-looking interior.

If I had to say something about the interior space of this product I would simply say use it as a 4 seater. Thanks to that huge central tunnel. The space is just enough for four average-sized adults and a kid. However, for tall people seated at the rear, the headroom seemed lacking because of the sloping silhouette. Otherwise, the front seats are very accommodating for most body shapes and are well-bolstered which hug you well in place.

Looking at the feature list of Tiago, it seems that TATA Motors has gone all guns blazing. It’s heavily packed with comfort and convenience enhancing items. Let me introduce you first the ConnectNext 7-inch touch screen unit, exclusively made by Harman. The 4 speakers 4 tweeters setup is just the best in the segment, I wouldn't shy away to compare it with a segment higher vehicles. Well, we have Altroz for that. The audiophiles traveling in the car can enjoy the music with Bluetooth or USB, AUX has been removed from the updated Tiago. The infotainment system also packs in Android Auto and AppleCar play. For the ease of parking and comply with the norms it also gets parking sensors and camera with adaptive guidelines.

Talking of storage spaces, Tata did give smart storage space all throughout the vehicle. It's surprising that the entry-level hatchback gets "cooled glove box". The boot space of the Tiago is of 242-liters which is acceptable but, the loading lip is high. Although you can fold the rear seats and liberate more space for those large luggages. Sadly they didn't give 60-40 split seats. Well, the segment doesn't get it either. But, hey it gets a parcel tray. XUV300 left the chat.

For the rear seat passengers providing center armrest would have been a welcome feature which is available in its twin the Tigor. Again no one in the segment provides it. Although the Tiago doesn't get rear central AC, the AC unit upfront is good enough to cool the cabin in no time. However, the 2020 Tiago comes equipped with automatic climate control.

Mechanically the Tata Tiago is powered by a three-cylinder 1.2-liter Revotron engine which gives out 86Ps of power and 114Nm torque mated to a 5-speed manual or 5-speed AMT (automated manual transmission). The numbers will not seem any great but is decent enough for your daily usage. It's quite a revv happy engine and power delivery is very linear making it a very nice car to drive around town. However, the engine isn't very refined and there's a fair bit of vibration that creeps into the cabin at idle. But again it isn't a deal-breaker.

Things are great as long as you are driving the Manual, once in the AMT things change. The AMT unit on offer seems to have been worked on well and the characteristic head-nod during gear shifts have reduced but not eliminated. I would still say the Smart Auto unit available on the Hyundai Santro is a bit better. MARGINALLY. Yes, the shifts are slow, revv hangs do occur in this vehicle sometime but, again if you are driving in the Manual mode the problem reduces to a certain extent.

The Tata Tiago manages a 0-100kmph time of 14.5 seconds which, although isn't the best in the segment, is still quite respectable. However the good news is on the highway, the car feels most comfortable and compliant at speeds of 120kmph. The engine doesn't feel tired and is eager to go faster. I DON'T ENCOURAGE DRIVING ABOVE PERMISSIBLE SPEED LIMITS. The Tiago is a regular city car and it makes no claim of being an enthusiast-pleasing set of wheels. Also, the 2020 Tiago loses out on the drive mode selector.

The gear shifts are fairly smooth but the throws are slightly long through the gate and ratios are biased more towards fuel-efficient driving. For the "Kitna deti hai gang" the ARAI claimed mileage of 23kmpl but, the AMT Tiago which we have is currently displaying an efficiency of 12.7kmpl. However, we will update you with the actual fuel economy.

The steering design is, however, lifted from the Gold Standard Altroz with a flat bottom. It's an electric power-assisted unit, and like many other units of its kind, it feels dead and provides no feedback. At really low speeds on broken roads, the steering picks up the smallest deflections from rocks, and this isn't a very nice feeling at the hands. That said, it is still the best steering in the segment. It's quite easy to use in town, while at higher speeds, the artificial weighting kicks in and improves confidence but is not enthusiastic to be thrown into the corners.

The driver’s seat is adjustable for height, so that might help matters for the tilt-only unit here, but a telescopic steering wheel would’ve been ideal. Auto manufacturers must realize that a tilt-and-telescopic steering system isn’t a convenience or comfort-enhancing feature, but more a safety feature and a must-have item, and should be made mandatory in all cars.

The USP car is its suspension setup. The ride quality in the Tiago is just phenomenal and can even rival some cars from a segment above. The front is all independent while the rear features a twist-beam with dual path strut design which channels spring load through one path and damper load through the other resulting in better vibration control and load management. Now on most cars, this would make for a bouncy and unstable ride at higher speeds over undulations on the highway. But the Tiago manages to hold its own at speeds of up to 130kmph. It's not too bad around the bends either.

Talking of safety, Tata Motors is becoming an epitome for safety standards in India. The Tiago was sent for a crash test to Global-NCAP for the Safer Cars For India initiative and scored a staggering 4-star safety. This is the highest in the segment. The Tiago also boasts of Dual-SRS Airbags, ABS, EBD, Corner Stability Control and more.

Tata has been in the game of making indigenous cars right from the beginning, a long time before the ‘Make In India’ and ‘Vocal for Local’ campaigns. Tiago is no exception. It has been developed and produced in-house completely. Buying a Tiago will make sure that you are vocal for local too.

If someone needs to find faults in the vehicle, I would start to nitpick since it doesn't suffer from any major issues. Also, congratulations to Tata Motors on the sale of 3 lakh units of Tiago. 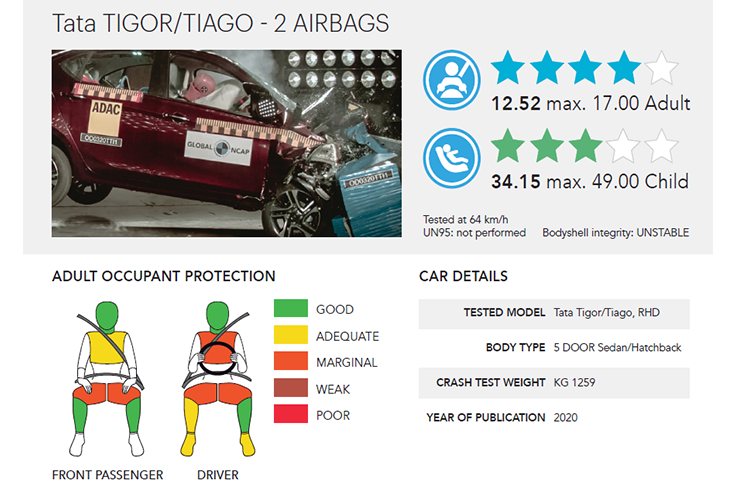 Different types of transmission. Which one is for you?